Once upon a time, a merchant named Sam owed a huge sum of money to Tom, a money lender. The time came when the merchant ran out of the last chance given to him to give the money back.

Tom was not at all good looking and ill-minded and so the merchant was in dilemma. Tom proposed a new condition. There was a mix of black and white pebbles on the ground where they were standing. He will take two pebbles on both hands, one will be white and the other will be black.

Tom bent down to pick the pebbles from the ground and the daughter noticed that he took black pebbles on both hands. The girl had three choices- to notify the same to her father which may provoke Tom, take the black pebble and sacrifice her life or simply refuse to take the pebble which might land her father into trouble. But what she did totally surprise Tom.

Moral: Sometimes, life offers you situations that not only demands hard work and perseverance but some creative thinking which saves the situation. 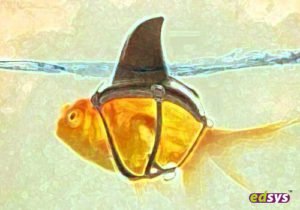