Some frogs were traveling through woods and two of them accidentally fell into a pit. The other frogs which were safe upside understood how deep the pit was and saw no hope for the frogs to escape out of it. 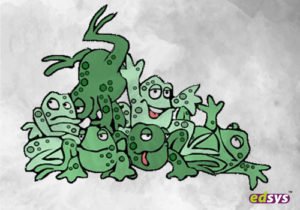 Both of these frogs started trying to get out of the pit but failed many times. The frogs on the safe side shouted at them to give up the pain of trying as it was not possible.

The other frogs asked him, “Did you not hear us?” He explained that he was deaf and thought other frogs were encouraging him to get out.

Moral: Some people around you may ask you to be on a safer side always and stop trying and taking risks. However, there is no gain without pain. So try hard to achieve success in life despite what life offers you.