A man was walking nearby to a group of elephants that was halted by a small rope tied to their front leg. He was amazed by the fact that the huge elephants are not even making an attempt to break the rope and set themselves free. 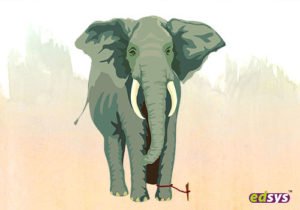 He saw an elephant trainer standing beside them and he expressed his puzzled state of mind. The trainer said “when they are very young and much smaller we use the same size rope to tie them and, at that age, it’s enough to hold them.

As they grow up, they are conditioned to believe they cannot break away. They believe the rope can still hold them, so they never try to break free.”

Moral: It is the false belief of the elephants that denied their freedom for lifetime. Likewise, many people are not trying to work towards success in their life just because they failed once before. So keep on trying and don’t get tied up with some false beliefs of failure.