The real-life story of Colonel Harland Sanders who was disappointed umpteen times in his life and still made his dream come true late in his life is really inspiring. 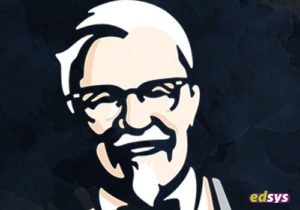 He is a seventh grade dropped out who tried many ventures in life but tasted bitter every time. He started selling chicken at the age of 40 but his dream of a restaurant was turned down many times due to conflicts and wars.

Later he attempted to franchise his restaurant. His recipe got rejected 1,009 times before the final approval. And soon the secret recipe, “Kentucky Fried Chicken” became a huge hit worldwide. KFC was expanded globally and the company was sold for 2 million dollars and his face is still celebrated in the logos.

Moral: Have you stopped your attempts to a venture just because you were rejected or failed a few times? Can you even accept failure of 1009 times? This story inspires everyone to try hard and believe in yourself until you see success despite how many times you have failed.